Pentruder, a global leader in rugged, high-quality concrete cutting equipment, were seeking a wireless solution to modernize their product line. Up until recently, their HF line of wall saws, wire saw and core drill equipment were operated using a cable remote.

Pentruder approached Hetronic to obtain a competitive, customized wireless radio remote control that would provide tool operators both greater flexibility and higher performance. In addition, the system was to include a joystick with expanded direction function as well as improvements in pulsing outputs of the potentiometer controls. 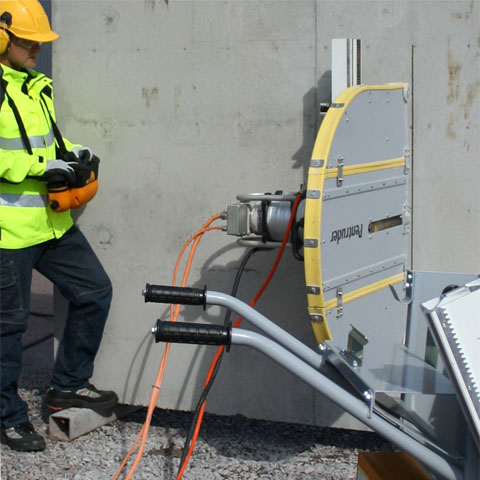 Solution: How Hetronic’s collaboration with Pentruder resulted in a world-class radio remote control.

Hetronic engineers worked closely with Pentruder to develop all the functional requirements, as well as understand the specific operator control needs and equipment operation. Once we finalized and agreed on the requirements documents, Hetronic developed two (2) prototype units for functionality testing and mechanical design.

During development, Hetronic also had to be cognizant of the need for “backward compatibility” to Pentruder’s older machines. We solved compatibility issues by maintaining the same output connector in the new design. Next, the new Hetronic crafted joystick was tested with both prototype units during actual operation of HF products. After extensive evaluation, the design agreed upon was that of the NOVA XL transmitter with custom control panel and new joystick, together with toggle switches and other controls that were approved for production.

Hetronic was successful in meeting the requirements for a more competitive wireless radio remote control solution for Pentruder’s HF line of saws and drills. We provided a familiar interface for their operators, while eliminating the use of cables. The wireless remote control design featured backward compatibility to older machines, which was imperative. The new Hetronic design also offers a greater increase in safety, efficiency and productivity. As a result, the Hetronic and Pentruder collaborative engineering effort expanded Pentruder customers’ capabilities by giving them more freedom to move around their work areas as well as offering them a greater visual supervision of the machine.

Tech Support is Just a Click Away
Scroll to top